A “Changing of the Guard” in the Texas State Guard

AUSTIN, Texas – On Sunday, October 31, as dignitaries, officials from the Texas Military Department (TMD) and members of the 6th Brigade and Texas State Guard Headquarters (TXSG) toasted to newly retired Major-General Robert J. Bodisch, Sr. at a reception at Camp Mabry, a poignant moment took place outside an empty office in Building 32, TXSG headquarters. Amid the dim lights, without fanfare or audience, a solitary state guard carefully and discreetly removed a plaque near the door reading “MG BODISCH”. In its place is mounted a new plate: “BG WOODS”.

Minutes earlier Bodisch’s retirement as TXSG commander was celebrated on the Camp Mabry parade ground with a colorful guard, a final ceremonial inspection of the troops (accompanied by Major General Tracy Norris, adjutant general of Texas and Commander of the Army of the Texas Forces), and congratulations from Norris. Also in attendance were Stephen McCraw, Director and Colonel of the Texas Department of Public Safety, Texas State Representatives Cecil Bell and Phil King (both TXSG service members), former TXSG commanders, TXSG officers from across the state, as well as friends and family members Bodisch.

“I can’t thank you enough for your service in Texas,” Bodisch said in brief farewell remarks to TXSG forces. “You are ‘Texans Serving Texans’, and you are our motto, ‘Equal to the job’.”

Bodisch was appointed TXSG Commander General in 2018 by Governor Greg Abbott. A United States Marine Corps veteran, Bodisch’s 45-year career in law enforcement and criminal justice included two periods of service in Iraq with the department’s International Criminal Investigations Training Assistance Program. of Justice. Bodisch also served as deputy director and chief of staff for the Texas Department of Public Safety, which included responsibility for Texas Homeland Security. He was awarded the Chairman of the Joint Chiefs of Staff, the Joint Civilian Service Medal of Honor in 2005, and the US Army Outstanding Civilian Service Medal in 2007 for his service in Iraq. Bodisch holds a peace officer license with over 6,800 hours of law enforcement education and training, a Bachelor of Science in Criminal Justice from the University of Houston and a Masters in Quality Systems Management from the National Graduate School in Falmouth, Massachusetts.

Bodisch joined the TXSG in 1988. His many years climbing the TXSG ranks well prepared him for what would be a transformative and historic 3 year term as Commanding General. In this role, Bodisch focused on training with an overhaul of professional military education, a review and top-to-bottom review of regulations and policies, as well as a reorganization and streamlining of the organization. , aligning brigades with the Texas Emergency Management Map, capable of quickly mobilizing teams of “mission-ready” specialists across the state. Bodisch transformed the TXSG into a common uniform, significantly increased the chaplaincy corps, developed a casualty notification and assistance program, a wellness program, a performance appraisal program, a program dispute resolution, a story unit, four new TXSG service awards and improved search and rescue training. Bodisch has strengthened dive and boat rescue teams, the TXSG recruiting program and a professional public affairs section.

Bodisch led the TXSG through a historic period of deployment, recording more than 80,000 days of military service – numbers not seen since World War II. Deployments included tropical weather events, a tornado, civil unrest, medical and border missions, as well as the COVID-19 response. Major General Bodisch is married to Charisse Canfield of Longview, Texas and has four sons: Robert, Jr., currently serving in the US Marine Corps; Kenneth, recently retired from the US Marine Corps and currently working with FEMA; James, who works for Tango in Austin; and Joseph, engineer at Anheuser-Busch.

Governor Abbott has yet to appoint a replacement as the permanent commanding general, but the Guard will be led in the interim by a respected and experienced leader with distinguished federal and state military service who is familiar with the needs of Texas, se cares deeply for the soldiers of the TXSG, and has a deep appreciation for the TXSG’s reputation as the preeminent state guard force in the country. 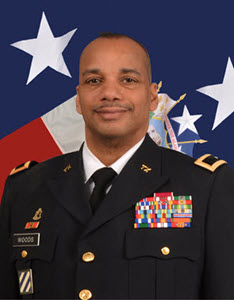 Woods’ resume includes several leadership positions in the 1st Battalion 112th Armor, Dallas, including the battalion chief executive during Operation Noble Eagle (the first deployment of troops to protect the U.S. infrastructure from terrorist attacks after the 11 September). In 2005, Woods became the first African-American commander of the 1st Battalion, 112th Armored, leading his unit in the first American training exercise in Romania after the fall of the Soviet Union. In 2006, Woods served as deputy commander of Operation Jump Start (OJS), an initiative launched by President Bush to secure the southwest border. He was also deputy commander of the Joint Interagency Task Force (JI-A-TF). Woods commanded the 136th Combined Arms Training Regiment in 2010, earning him the Army Doctrine and Training Command Institution of Excellence. In 2012, Woods deployed to Kandahar, Afghanistan, as the Security Forces Agency (S-FAT) Task Force Commander.

Since 2015, Woods has held various positions within the State Guard, most recently as Deputy Commanding General.

As a former Dallas Police Officer and Special Agent in the Drug Enforcement Administration (DEA), Woods served in the Los Angeles Field Division before moving to the Waco Resident Office of the Houston Field Division in 1999. In 2005, Woods transferred to the Houston office where he served on several High Intensity Drug Trafficking Area (HIDTA) teams before moving to the Technical Group. Woods retired from the DEA in June 2018.

Brig. General Woods holds a BA in Criminal Justice from Texas Christian University and an MSc from the United States Army War College.

In the military, such transitions are sometimes referred to as “changing of the guard”. But Woods has made it clear that his plans for the immediate future are to maintain the momentum established by his predecessor: a remarkable trajectory for which former TXSG Bodisch commanding general will long be remembered.

The mission of the Texas State Guard is to provide mission-ready forces to assist state and local authorities in the event of a state emergency; conduct homeland security and community service activities under the auspices of Defense Support to Civilian Authorities, and reinforce the Texas Army National Guard and Texas Air National Guard as required.