MOSCOW (AP) – Dozens of protesters have been killed in Kazakhstan in attacks on government buildings and at least a dozen police have died, including one who was found beheaded, authorities said on Thursday.

There have been attempts to storm buildings overnight in the country’s largest city, Almaty, and “dozens of attackers have been liquidated,” police spokeswoman Saltanat Azirbek said. . She spoke on state news channel Khabar-24. The reported attempts to storm the buildings came after widespread unrest in the city on Wednesday, including the seizure of the mayor’s building, which was set on fire.

State news channel Khabar-24 quoted the city commander’s office as saying Thursday that 353 other law enforcement officers were injured in addition to the 12 killed.

Kazakhstan is experiencing the worst street protests the country has seen since gaining independence three decades ago.

A Russian-led military alliance, the Collective Security Treaty Organization, announced Thursday morning that it would send peacekeeping troops to Kazakhstan at the behest of President Kassym-Jomart Tokayev. Kazakhstan has been shaken by the intensification of protests that began on Sunday against a sharp increase in the prices of liquefied petroleum gas. The protests started in the west of the country but spread to Almaty and the capital Nur-Sultan.

By registering, you accept the conditions

On Wednesday, Tokayev vowed to take severe measures to quell the unrest and declared a two-week state of emergency for the whole country, extending one that had been announced for both the capital of Nure-Sultan and the Largest city of Almaty which has imposed a nighttime curfew and restriction of movement in and around urban areas. The government resigned in response to the unrest.

Although the protests began over a near doubling in the prices of a type of liquefied petroleum gas that is widely used as vehicle fuel, their size and rapid spread suggest that they reflect wider discontent in the country which has been under the rule of the same party since gaining independence from the Soviet Union in 1991.

Tokayev claimed the unrest was led by “terrorist groups” who had received aid from other unspecified countries. 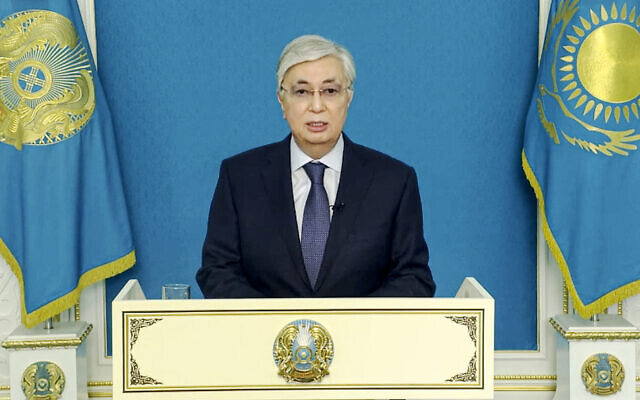 Kazakhstan, the ninth largest country in the world, borders Russia to the north and China to the east and has significant oil reserves that make it strategically and economically important. Despite these reserves and mineral wealth, discontent with poor living conditions is strong in some parts of the country. Many Kazakhs also resent the domination of the ruling party, which holds more than 80% of seats in parliament.

Many protesters who converged on the mayor’s office on Wednesday carried batons and shields, according to earlier reports in Kazakh media. Tass later said the building was engulfed in flames. 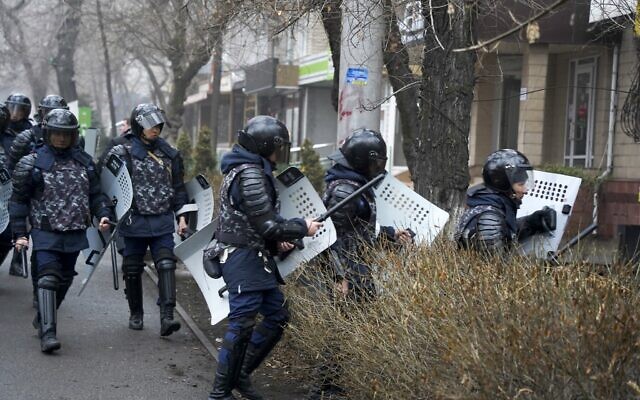 The protests appear to have no identifiable leader or claim. Many protesters shouted “old man, go”, an apparent reference to Nursultan Nazarbayev, the country’s first president who continued to wield tremendous influence after his resignation in 2019. Nazarbayev dominated Kazakhstan politics and his reign has been marked by a moderate cult of personality. Critics say he has effectively instituted a clan system within government.

After the protests spread to Nour-Sultan and Almaty, the government announced his resignation, but Tokayev said ministers would remain in office until a new cabinet was formed, making it uncertain whether resignations will have a significant impact.

Earlier this year, prices for gas known as LPG roughly doubled as the government moved away from price controls as part of efforts to move to a market economy.

Are you serious. We appreciate this!

We are really glad you read X Times of Israel Articles in the past month.

That’s why we come to work every day – to provide discerning readers like you with must-see coverage of Israel and the Jewish world.

So now we have a request. Unlike other media, we have not set up a paywall. But since the journalism we do is expensive, we invite readers for whom The Times of Israel has become important to help support our work by joining The Times of Israel community.

For as little as $ 6 per month, you can help support our quality journalism while benefiting from The Times of Israel WITHOUT ADVERTISING, as well as access to exclusive content reserved for members of the Times of Israel community.

Already a member? Log in to no longer see this