A World War II veteran was given an escort and honor guard from Royal Corps of Signals personnel during his funeral.

Corporal Stan “Swanee” Swansborough, a former Royal Signals dispatcher, has died at the age of 96.

His coffin was escorted by riders from the Royal Signals Riders Branch, before some 50 socially distanced Royal Signals soldiers lined the road to Easthampstead Crematorium to form an honor guard.

Jane Flowers, Mr Swansborough’s daughter, said she “has been overwhelmed by the amount of love people have for her generation as they are all disappearing. very quickly”.

Mr Swansborough was called in just before his 18th birthday and quickly drove between Whitehall and the south coast to provide information to the thousands of soldiers massing for D-Day.

Two weeks after the invasion, he landed in France, relaying messages in his Willys jeep between General Bernard Law Montgomery and the Supreme Allied Commander, General Eisenhower.

From France, Mr. Swansborough fought in Holland, Belgium and eventually Germany, before spending 18 months in India.

But Ms Flowers said her father did not speak about World War II “until fairly recently”.

“I think it was one of those things where everyone had gone to war and he felt like… because he wasn’t in a combat unit, he was in a support unit. , he felt that others deserved more honor than him., “she said.

And Emily Hickman, Mr Swansborough’s granddaughter, said it was only after a family trip to Normandy that “everything started to flow”.

After World War II, Mr Swansborough worked for BOAC, which eventually became British Airways, but his attachment to his old unit never wavered.

He returned to Normandy on several occasions and was the guest of honor at Signals headquarters in Blandford, Dorset – becoming an honorary friend of the Corp.

Steve “Scouse” Hall, who served in the Royal Signals between 1985 and 2002, said Mr. Swansborough “gave us the right to liberty”. 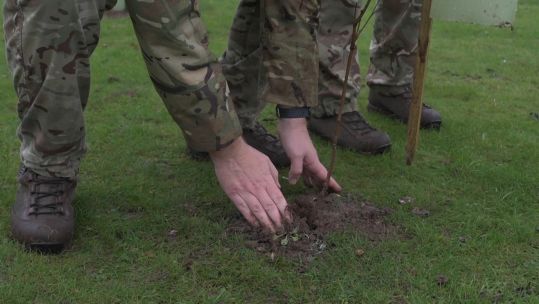 “We will do all we can to honor them.”

In 2014, Mr. Swansborough received the Legion of Honor, the highest order of merit in France.

He was also awarded the Étoile 1939-1945, the Étoile de France and Deutsch medals, the Defense Medal and the Victory Medal.

The military attaché of the Royal Netherlands Embassy in London also awarded him the Liberator Appreciation Medal.